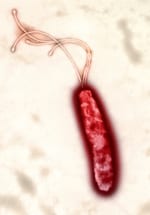 Helicobacter pylori, commonly known as H. pylori, is a bacterial infection of the stomach or duodenum (the first part of the small intestine). While the infection is believed to be present in more than half of the world's population, a great many people are asymptomatic and unaware that they have the infection. Nonetheless, H. pylori can be serious and is a common cause of ulcers. In addition, H. pylori that produces inflammation puts patients at increased risk of developing stomach cancer.

The precise cause of H. pylori is unknown, however the infection is transmitted through direct contact with an infected person's saliva, vomit or fecal matter or through contaminated food or water. Very often, the bacteria are acquired during childhood. It remains unclear why certain individuals are resistant to the bacteria and therefore do not develop active infections.

H. pylori by itself does not result in identifiable symptoms. Patients in whom a gastric ulcer or gastritis develops, however, exhibit the following symptoms:

In patients with gastritis or stomach ulcers, the ache or burning sensation in the stomach is worse when the stomach is empty. Signs that the disorder requires immediate medical attention include:

Vomit that resembles coffee grounds is cause for concern.

Diagnosis of H. pylori may be determined using one or more of the following tests:

Generally speaking, the breath and stool tests are considered more accurate than the blood work. Because the endoscopy to obtain a biopsy is an invasive procedure, it is usually employed only when it is necessary to rule out or confirm the presence of other digestive disorders.

Because antacids, antibiotics and proton pump inhibitors (PPIs) can get in the way of accurate test results, patients are requested to stop all such medications for 1 to 2 weeks prior to diagnostic testing.

There are several medications available to treat patients with H. pylori. Typically, patients are treated with two antibiotics at once in an attempt to prevent or circumvent antibiotic resistance. In addition, medication is prescribed to relieve symptoms and to aid in healing the lining of the stomach. Medications in the latter category include:

Which medications are most suitable for a particular patient is determined by the physician who takes into account the patient's medical history and individual test results. Normally, the patient is retested for H. pylori after a month of treatment. If the treatment has not been effective, another combination of antibiotics may be prescribed.